The most recent Rafe Sagarin Fund award was announced at the WSN annual meeting. Congratulations to our winner! Check back at this site for updates on past winners’ projects.

Investigating the interplay between parasitism and host biogeography

I was raised in City Heights, a San Diego community known for its ethnic diversity. My experiences as a first-generation Mexican-American and first-generation college student have shaped the kind of scientist and aspiring professor I am working to become, while interactions with natural historians strongly influenced my approach to conduct science. I was first exposed to science through Ocean Discovery Institute as a high school student. This program engages underrepresented students in marine science through field immersion experiences conducted in Baja California. This exposure ignited my interest in ecology, as I worked with scientists to examine the energy connectivity between the highly productive Sea of Cortez and the arid islands of Bahía de Los Angeles—continuing the work initiated by the late Dr. Gary Polis—while informing local communities about conservation. Since then, I have received my BA in Biology from UC Santa Barbara (under the guidance of Dr. Armand Kuris) and an MS in Marine Science from the University of San Diego (under the mentorship of Dr. Drew Talley and Dr. Theresa Sinicrope-Talley)—which involved historical and contemporary sampling to investigate spatial and temporal changes in bivalve communities of southern California and northern Baja California. Currently, I am a PhD candidate working under the mentorship of Dr. Ryan Hechinger at Scripps Institution of Oceanography, UC San Diego. My thesis comprises observational research documenting how parasite community structure varies throughout the entire or most of the known geographic ranges of over 20 invertebrate and 4 fish host species from three coastal habitats (estuary, rocky shore, sandy beach) along the West coast of North America. 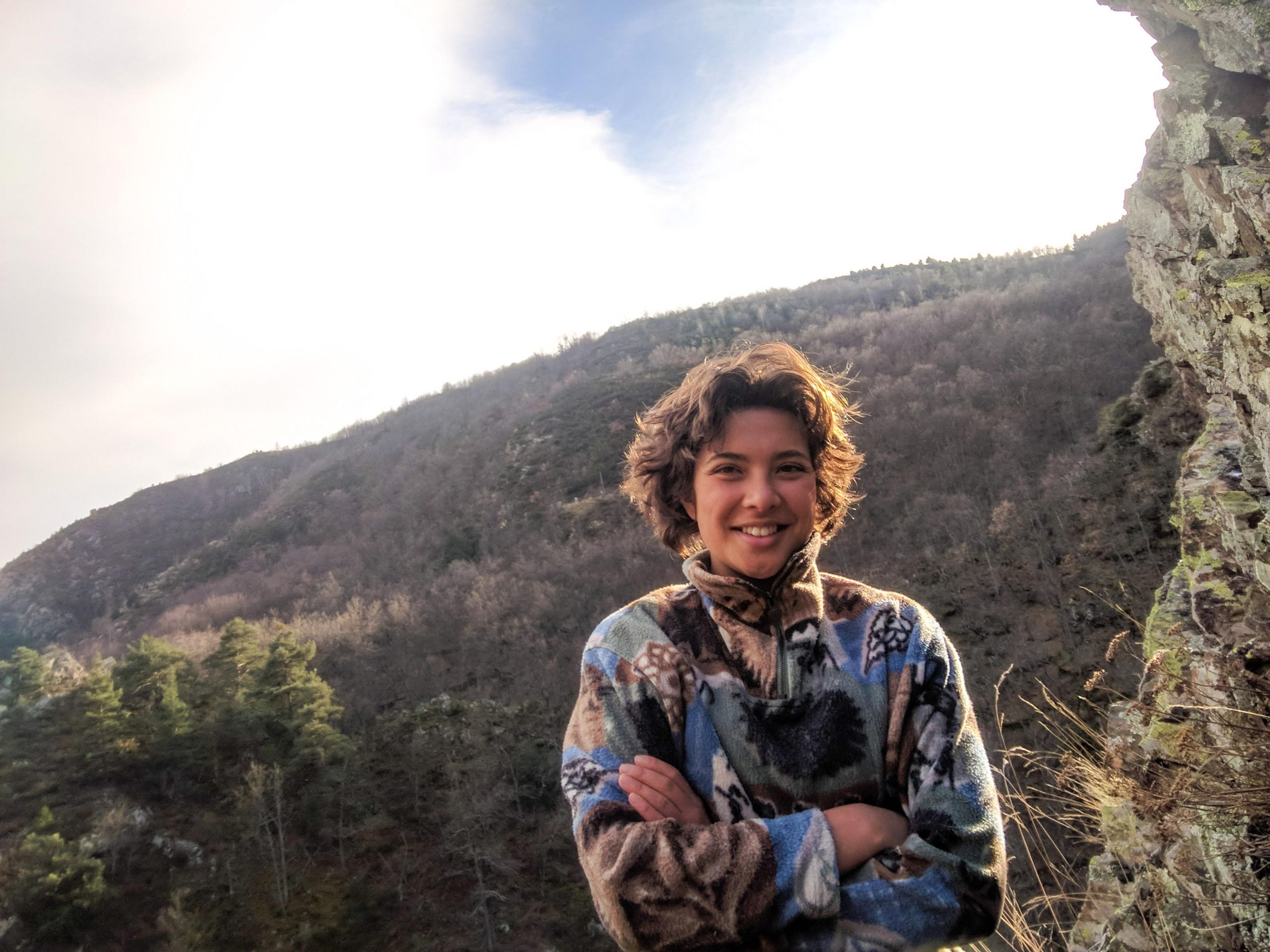 I am an undergraduate researcher in the Laboratory of Organismal Biology at Stanford University interested in understanding source and synthesis of biologically derived toxins, and subsequent effects on human brain function. Growing up, I spent a lot of time by the sea and used to create mini aquariums for my family using empty jam jars. Noting cultural differences and local understandings of ecology from both sides of my Corsican-Indonesian family fed my interest in psychology and ethnobotany, and led me to research psychoactive toxins through this lens. I am grateful to have wonderful friends and family, Mac Poepoe and Bobby Alcain in Hawai’i and my PI, Lauren O’Connell at Stanford, as inspiration and support for following my research interests! A happy weekend for me would be spent with friends snorkeling at Monterey, eating pears and watching or making short films.

Project:
My current project investigates the “Chief of Ghosts” hallucinatory fish from Hawai’i. Mo’olelo (Hawai’ian myths) speak of “nightmare fish” or “chief of ghosts” – fish that induce severe hallucinations, nightmares, and dizziness, and written reports from as early as the 1960’s describe people experiencing vivid hallucinations after eating certain goatfish during summer months. Hallucinogenic Reef Fish Poisoning (HRFP) is a long-recognised but little understood health hazard associated with consumption of certain fish, which peak in toxicity during summer months in the Hawaiian islands. Although the mechanistic basis is currently unknown, HRFP is classified as a potential health hazard that is distinct from ciguatera (or other fish poisonings). I aim to understand how the fish comes to contain and accumulate this marine toxin, and how the molecules interact with human neural function to produce hallucinations. I would like to describe this toxin at the molecular level and in its ecological context, through to its neural and eventually psychological effects. Respect for local and traditional knowledge alongside western scientific investigation is crucial to this process.

Beth Lenz (Hawaiʻi Institute of Marine Biology, University of Hawaiʻi at Mānoa)
Examining the Potential for Successful Reproduction in Hawaiian Reef-Building Corals as the Ocean Warms

The first Rafe Sagarin Fund awards were announced at the 2016 WSN meeting. Congratulations to our first two winners! Check back at this site for updates on their projects. 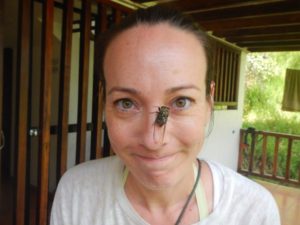 Early on, I discovered my insatiable curiosity for insects, spiders, and the world of entomology. My passion for entomology only grew as an adult, but it took time for it to mature into a career. While I spent my twenties working as a bartender, I could feel the absence and pull of the natural world and sought an outlet to satisfy it. That outlet was an entomology-focused blog (www.buggirl.tumblr.com). My blog keeps me in touch with the naturalist inside me, and is a constant reminder why I chose to become a biologist, otherwise the daily stresses of graduate school would, at times, feel insurmountable. The ability to touch so many people at once and excite them about science drives me to be a better scientist. Social media is a powerful tool that we can use to promote conservation in such a novel way, and now more than ever the general public is excited to be an active participant.

I am currently a Master’s candidate at CSUN, working with Dr. David Gray. 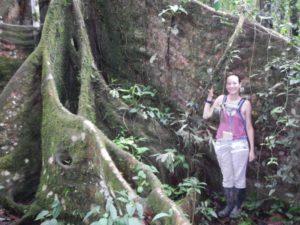 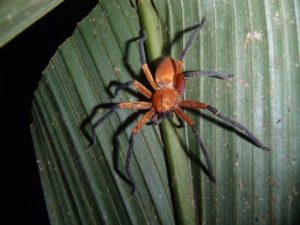 (Possibly a new species of Huntsman?)

This observational approach can lead to novel insights helping to reveal which forces contribute to the tremendous evolutionary success of spiders. In addition, the ecomorphological patterns I discover among diverse spider species can be applied to other organisms, helping to elucidate the role morphology plays in the interplay between ecology and evolution. 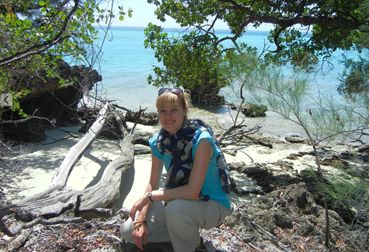 I a second year PhD student at the University of California, Davis. My research focuses on applied conservation, and quantifying anthropogenic drivers of biodiversity decline. Specifically, I am interested in using cutting edge remote sensing methods to monitor past and current deforestation rates on the island of Pemba, Tanzania. I am originally from the UK, where previous work at the Zoological Society of London has included reconstructing baseline populations for hunted mammals in North America, and collaborating with the World Wildlife Fund to assess the characteristics of successful species recovery programs.

Pemba has experienced a 95% forest decline in the past century, a large proportion of which include mangrove forests (CARE, 2012). Sea level rise and human overuse are known causes of mangrove loss, yet the extent to which these threats impact all eight mangrove species on the island is unknown. I propose to establish the rate of mangrove deforestation and afforestation within the last 20 years, and attribute this to the direct and indirect anthropogenic pressures using advanced methods in remote sensing.